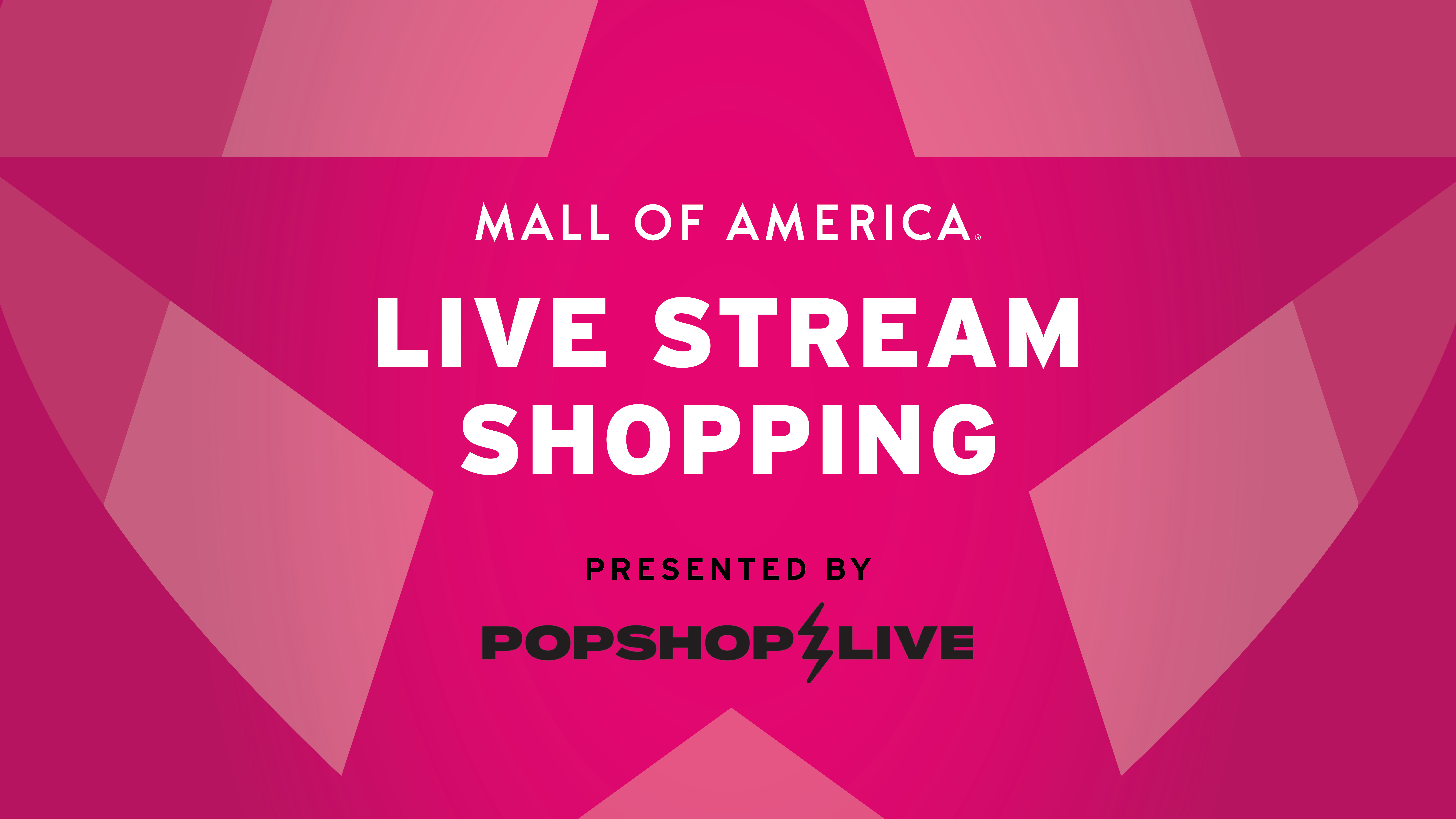 Livestream Shopping at Mall of America®

Mall of America has partnered with Popshop Live to bring you livestream shopping.

A shopping idea that’s virtually… perfect! Tune in to shop this seasons must haves from just-opened stores to your all-time favorites all from the comfort of your phone or browser https://popshop.live/MOA. 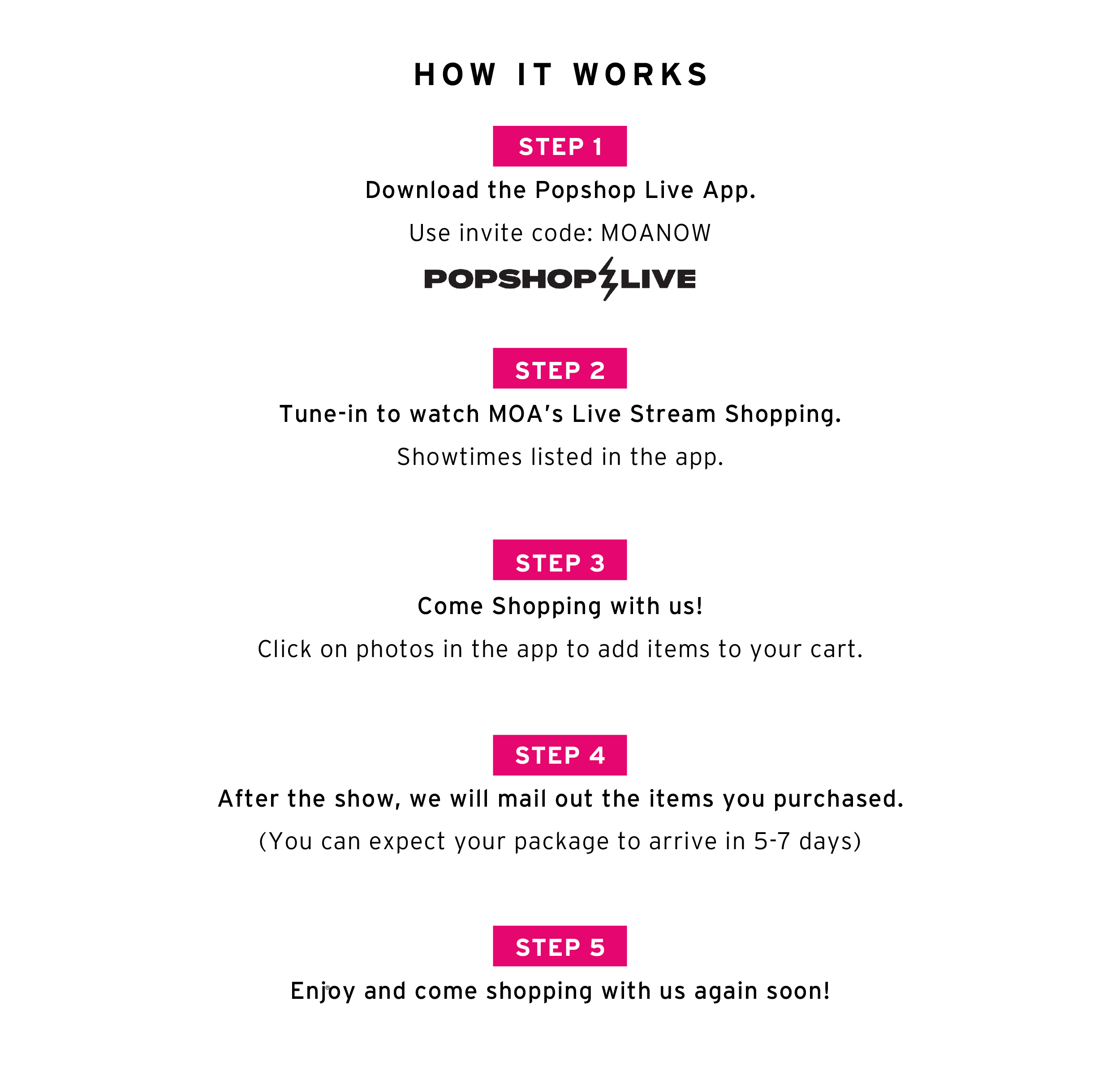 Q: Can customers track their orders?
A: Yes, you will receive an email from Popshop Live letting you know when your order has shipped that will include your tracking number. Your tracking number will also appear in your profile.

Q: What is your returns policy?
A: We use the return policy for each store we feature on the show. If you would like to return an order, you’ll begin the process directly from the PopShop Live app and follow the instructions there.

For any other questions or concerns, please email Popshop Live at support@popshop.live

When you use the Pop Shop Live Service, you are using a third-party service not managed or controlled by Mall of America or Nickelodeon Universe. We are not responsible for the functionality or the privacy policies related to this service and you should review the Pop Shop Live Privacy Policy for information regarding how they how they use and maintain your personal information.

LIVESTREAM TOY CHARITY SWEEPSTAKES OFFICIAL RULES NO PURCHASE OR PAYMENT NECESSARY. A PURCHASE OF ANY KIND WILL NOT INCREASE YOUR CHANCES OF WINNING.

1. Eligibility: Only legal residents of the United States and the District of Columbia who are 18 years of age or older at the time of entry (residents of Alabama, and Nebraska must be 19 years of age, residents of Mississippi must be 21 years of age) are eligible to enter the LiveStream Toy Charity Sweepstakes (“Sweepstakes”). Void where prohibited and subject to all applicable laws and regulations. Sponsor(s) (as defined below), Sponsor’(s) parent, subsidiary and affiliate entities and their respective officers, directors, agents, and employees, as well as the immediate family (spouse, parents, siblings and children) and household members (whether or not related) of each such Sponsor, Facebook, Instagram, Twitter and each of their respective parents, affiliates, subsidiaries and advertising and promotion agencies are not eligible to enter or win. Entrants must fulfill all requirements set forth in the Official Rules and abide by all decisions of the Sponsor(s) and/or Administrator in order to be eligible for a prize.

2. How to Enter: Eligible individuals may enter the Sweepstakes by watching the Mall of America LiveStream during the Sweepstakes Period and following the instructions for the Sweepstakes. During the Mall of America LiveStream show two (2) winners will be chosen by random. You must be present on the LiveStream show to qualify as a winner. By watching the Mall of America LiveStream show and following the instructions given during the LiveStream show, you represent that you have complied with the submission guidelines and content restrictions as specified on the Landing Page. Entrant may only win one time during each game of the Sweepstakes Period. As of December 23, 2020, eligible individuals must already own or have the legal right to the smartphone or mobile device in their possession. The Sponsor(s) is not responsible for charges you may incur as a result of wireless phone transmissions. Entrants acknowledge that Data messages are distributed and delivered through third-party providers. All entries will be deemed to have been made by the authorized account holder for the submitted email address. Submitting mass entries or entries generated by a script, macro or use of automated devices is prohibited and may result in disqualification. False or deceptive acts, as determined by Sponsor(s), will render the entrant ineligible.

Odds of Winning: Odds of winning depend on the total combined number of eligible individuals watching the LiveStream at the time the winner is chosen. The potential winners will be chosen at random at two (2) times during the LiveStream show using randomization methods. Eligible individuals may not have won a Prize from Mall of America or Nickelodeon Universe within the past ninety (90) days.

4. Prize(s) and Donor(s): Two (2) prize winners will each receive one (1) Apple Airpods. Approximate Retail Value $160. Winner will not receive difference between actual and approximate retail value. Sponsor(s) make(s) no warranties concerning any component of a Prize that is not provided directly by Sponsor(s). Prize is non-transferable and not redeemable for cash, and no substitution will be made unless Sponsor(s), in its sole discretion, determines otherwise. Sponsor(s) reserves the right to substitute a Prize for one of equal or greater value, including cash, in Sponsor’(s) sole discretion, if a Prize should become unavailable for any reason. Winner is solely responsible for reporting and paying any and all applicable federal, state and local taxes, and for any and all other costs, assessments, expenses, and fees associated with Prize award, receipt and use. If a Prize allows the winner to share the Prize with guests, Sponsor(s) may require each of the winner’s guests to sign and return a General Release & Waiver and Publicity Release, as a condition for use of any component of the Prize. If a guest is a minor in his/her state of residency, the minor’s parent or legal guardian must verify and confirm his/her agreement to the General Release & Waiver and Publicity Release in order to participate in the use of any component of the Prize. Prize elements may not be separated.

5. Release/Publicity Consent: As a condition to receipt of a Prize, potential winner agrees to sign a General Release & Waiver releasing Sponsor(s) and its parent, affiliate, subsidiary entities, its merchants, and their respective agents, employees, suppliers, and advertising/promotional and judging agencies (the “Sponsor Group”) Facebook, Instagram, Twitter and each of their respective parents, affiliates, subsidiaries, from any and all liability whatsoever for injuries, damages or losses to persons and/or property which may be sustained in connection with the Sweepstakes or the Prize. If a potential Prize winner is a minor in his/her state of residence, the Prize may be awarded in the name of the parent or legal guardian, in the sole discretion of Sponsor(s), and such Parent/Guardian may be required to fulfill all eligibility and other requirements necessary, as determined by Sponsor(s), to claim the Prize. As a condition to receipt of any Prize, potential winners (or their Parent/Guardian in the case of minors) may be required to sign affidavits/disclaimers and tax forms, and potential winners (or Parent/Guardian in the case of minors) are responsible for any and all costs, taxes, assessments, expenses, and fees associated with the Sweepstakes and Prize award, receipt and use. Except where prohibited by law, winners consent and agree to the use of their names, city and state/country, photographs, likeness, submission(s), statements, video, and voices for broadcast, marketing and promotional purposes in all forms of media (including, without limitation, online) by Sponsor(s) and its promotional agencies, Sweepstakes partners, designees, successors and assigns, before, during and after the Sweepstakes, without compensation or right of review, attribution, or notice, in perpetuity. Winner(s) (or their Parent/Guardian in the case of minors) may be required by Sponsor(s) to sign a Publicity Release (where not prohibited by law) regarding such consent as a condition to receipt of a Prize.

7. General Conditions: Sponsor(s) reserves the right to cancel, suspend and/or modify the Sweepstakes, or any part of it, if any fraud, technical failure, computer virus, tampering, unauthorized intervention, or any other factor beyond Sponsor’(s) control impairs the integrity or proper functioning of the Sweepstakes, as determined by Sponsor(s) in its sole discretion. In the event there is more than one Sponsor and the Sponsors) are in disagreement over a modification, suspension, or termination of the Sweepstakes, then MOAC Mall Holdings LLC shall have the final decision with respect to any modification, suspension, or termination of the Sweepstakes. Sponsor(s), in its sole discretion, reserves the right to disqualify any individual it finds to be tampering with the entry process or the operation of the Sweepstakes or to be acting in violation of these Official Rules or acting in an unsportsmanlike or disruptive manner. Any attempt by any person to deliberately undermine the legitimate operation of the Sweepstakes may be a violation of criminal and/or civil law, and, should such an attempt be made, Sponsor(s) reserves the right to prosecute and/or seek damages from any such person to the fullest extent permitted by law. Sponsor’(s) failure to enforce any provision of these Official Rules shall not constitute a waiver of that provision. Sponsor(s) is not responsible for incomplete, illegible, misdirected, misprinted, late, or lost entries, submissions or Prize notifications; or for lost, interrupted, inaccessible or unavailable networks, servers, satellites, Internet service providers, websites, or other connections; or for miscommunications, failed, jumbled, scrambled, delayed or misdirected computer, telephone or cable transmissions; or for any technical malfunctions, failures, difficulties, or other errors of any kind or nature; or for the incorrect or incomplete capture of information, or the failure to capture any information. No mechanically reproduced, illegible, incomplete, forged, software-generated or otherwise multiple entries will be accepted. If any dispute regarding identity of any winner cannot be resolved to Sponsor’(s) satisfaction, that entrant/potential winner will be disqualified.

8. Disputes: Except where prohibited, entrant agrees that: (1) any and all disputes, claims and causes of action arising out of or connected with this Sweepstakes or any Prize awarded shall be resolved individually, without resort to any form of class action, and exclusively by the Federal District Court of Hennepin County, Minnesota; (2) any and all claims, judgments and awards shall be limited to actual out-of-pocket costs incurred, but in no event attorneys’ fees; and (3) under no circumstances will entrant be permitted to obtain awards for, and entrant hereby waives all rights to claim, indirect, punitive, incidental and consequential damages and any other damages, other than for actual out-of-pocket expenses, and any and all rights to have damages multiplied or otherwise increased.

10. Entrant's Personal Information: All personal information collected from entrant is subject to the Sponsor(s) Privacy Policy (as set forth on the website) except to the extent waived by a winner through agreement to a Publicity Release.